Because Direct Delivery received $10, it must debit the account Cash. It must also credit a second account for $10. The second account will be Service Revenues, an income statement account. The reason Service Revenues is credited is because Direct Delivery must report that it earned $10 (not because it received $10). Recording revenues when they are earned results from a basic accounting principle known as the revenue recognition principle. The following tip reflects that principle.

Revenues accounts are credited when the company earns a fee (or sells merchandise) regardless of whether cash is received at the time.

Here are the two parts of the transaction as they would look in the general journal format:

Let's assume that on December 3 the company gets its second customer—a local company that needs to have 50 parcels delivered immediately. Joe's price of $250 is very appealing, so Joe's company is hired to deliver the parcels. The customer tells Joe to submit an invoice for the $250, and they will pay it within seven days.

Joe delivers the 50 parcels on December 3 as agreed, meaning that on December 3 Direct Delivery has earned $250. Hence the $250 is reported as revenues on December 3, even though the company did not receive any cash on that day. The effort needed to complete the job was done on December 3. (Depositing the check for $250 in the bank when it arrives seven days later is not considered to take any effort.)

In the general journal format, here's what we have identified so far:

We know that the unnamed account cannot be Cash because the company did not receive money on December 3. However, the company has earned the right to receive the money in seven days. The account title for the money that Direct Delivery has a right to receive for having provided the service is Accounts Receivable (an asset account).

Again, reporting revenues when they are earned results from the basic accounting principle known as the revenue recognition principle.

For simplicity, let's assume that the only expense incurred by Direct Delivery so far was a fee to a temporary help agency for a person to help Joe deliver parcels on December 3. The temp agency fee is $80 and is due by December 12.

If a company does not pay cash immediately, you cannot credit Cash. But because the company owes someone the money for its purchase, we say it has an obligation or liability to pay. Most accounts involved with obligations have the word "payable" in their name, and one of the most frequently used accounts is Accounts Payable. Also keep in mind that expenses are almost always debited.

The accounts and amounts for the temporary help are:

If a company does not pay cash right away for an expense or for an asset, you cannot credit Cash. Because the company owes someone the money for its purchase, we say it has an obligation or liability to pay. The most likely liability account involved in business obligations is Accounts Payable.

Revenues and expenses appear on the income statement as shown below: 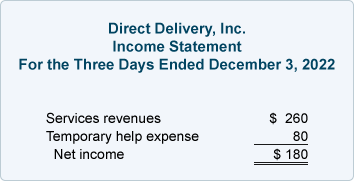 After the entries through December 3 have been recorded, the balance sheet will look like this:

Notice that the year-to-date net income (bottom line of the income statement) increased Stockholders' Equity by the same amount, $180. This connection between the income statement and balance sheet is important. For one, it keeps the balance sheet and the accounting equation in balance. Secondly, it demonstrates that revenues will cause the stockholders' equity to increase and expenses will cause stockholders' equity to decrease. After the end of the year financial statements are prepared, you will see that the income statement accounts (revenue accounts and expense accounts) will be closed or zeroed out and their balances will be transferred into the Retained Earnings account. This will mean the revenue and expense accounts will start the new year with zero balances—allowing the company "to keep score" for the new year.

Marilyn suggested that perhaps this introduction was enough material for their first meeting. She wrote out the following notes, summarizing for Joe the important points of their discussion: