Note: Double-entry bookkeeping means that every transaction will involve a minimum of two accounts.

The words debit and credit have been associated with double-entry bookkeeping and accounting for more than 500 years. Here are the meanings of those words:

debit: an entry on the left side of an account

credit: an entry on the right side of an account

The debit and credit rule in double-entry bookkeeping can be stated several ways:

The accuracy of accounting software will also ensure that the accounts and the trial balance will always be in balance. Here is an example of a partial trial balance: 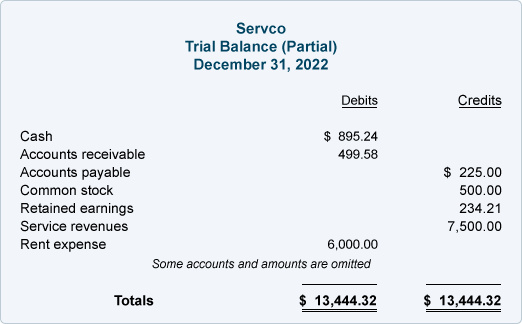 To assist in visualizing the effect of recording a debit or credit amount and the resulting balances of general ledger accounts, it is helpful to draw a T-account, as shown here:

Since every transaction will involve at least two accounts, we recommend that you always begin by drawing two T-accounts. For example, if a company pays its rent of $2,000 for the current month, the transaction could be depicted with the following T-accounts: