There are two main methods of accounting (or bookkeeping):

The accrual method of accounting is the preferred method because it provides:

As a result, US GAAP requires most corporations to use the accrual method of accounting.

The following table compares the accrual and cash methods of accounting: 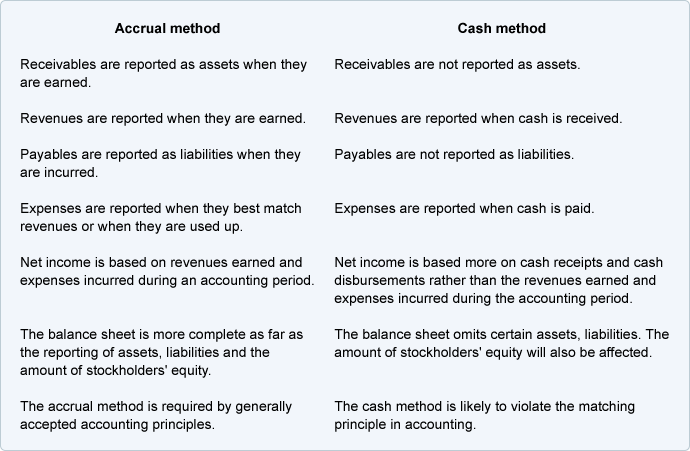 Note: Some small companies may be allowed to use the cash method of accounting and in turn may experience an income tax benefit. Since our website does not provide income tax information, you should seek tax advice from a tax professional or from IRS.gov.

To illustrate the reporting of revenues under the accrual method, let's assume that the hypothetical business Servco provides a service to a customer on December 27. Servco prepares a sales invoice for the agreed upon amount of $1,000. The invoice is dated December 27 and states that the amount is due in 30 days.

Under the accrual method, on December 27 Servco:

If Servco uses accounting software to prepare the invoice, the following will be recorded automatically as of December 27:

In addition to updating the general ledger accounts (which are used in preparing the financial statements), the software will update and store the customer's information for generating an aging of accounts receivable and a statement of each customer's activity.

To illustrate, let's assume that Servco uses a temporary help agency at a cost of $200 in order to assist in earning revenues on December 27. The invoice from the temp agency is received on December 27, but it will not be paid until January 4.

Under the accrual method, on December 27 Servco:

If accounting software is used to record the temp agency invoice, the following will occur automatically as of December 27:

When Servco issues its check on January 4:

If Servco had only the two transactions described above, its net income under the accrual method for the day of December 27 will consist of the following:

Obviously, the accrual method does a better job of reporting what occurred on December 27, the date that Servco actually provided the services and incurred the expense.