The heading found at the top of the balance sheet contains the following:

The date communicates to the reader that the amounts reported on the balance sheet represent the balances in the company's asset, liability, and stockholders' equity accounts after all transactions up to the final moment of the date have been accounted for.

NOTE: Of the five financial statements, only the balance sheet's heading indicates a point or moment in time, such as December 31, 2021. This date means the amounts shown reflect all transactions up to midnight on December 31, 2021.

The headings on the other four financial statements indicate a span of time (interval of time, period of time) during which the amounts occurred. For instance, the heading of a company's income statement might indicate "For the year ended December 31, 2021". This tells the reader that the amounts reported for sales and expenses are the total amounts for the 365 days of the year.

Assets are a company's resources (things the company owns). Their amounts appear on the company's balance sheet if they:

Assets are recorded in the company's general ledger accounts at their cost when they were acquired. In accounting cost means all costs that were necessary to get the assets in place and ready for use. For example, the cost of new equipment to be used in a business will include the cost of getting the equipment installed and operating properly.

Reporting assets on the balance sheet

The general rule (except for certain marketable securities) is that the cost recorded at the time of an asset's purchase will not be increased for inflation or to the asset's current market value.

However, some accounting rules do require some recorded costs to be reduced through a contra asset account. For example, the cost of buildings and equipment used in the business will be depreciated and the amount of the depreciation will be recorded with a credit entry to the contra asset account Accumulated Depreciation. It is also possible that the reported amount of these and other long-term assets will be reduced when their book values (cost minus accumulated depreciation) have been impaired.

A quick definition of current assets is cash and assets that are expected to be converted to cash within one year of the balance sheet's date.

NOTE: The complete definition of a current asset is cash and assets that are expected to turn to cash within one year of the balance sheet's date, or within the company's operating cycle, whichever is longer.

Here is the current asset section from our sample balance sheets: 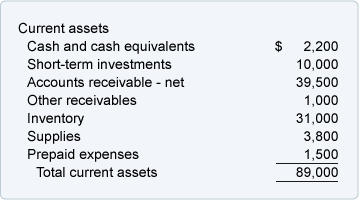 Within the current asset section of the balance sheet, we usually see amounts for the following:

Cash and cash equivalents appear as the first current asset and will be the combined amount of the following:

Short-term investments are temporary investments that do not qualify as cash equivalents but are expected to turn to cash within one year.

Generally, a company's accounts receivable will turn to cash within a month or two depending on the company's credit terms.

The balance in the general ledger account Allowance for Doubtful Accounts is an estimate of the amount in Accounts Receivable that the company anticipates will not be collected.

You can learn more by visiting our topic Accounts Receivable and Bad Debts Expense.

Another example of other receivables is a corporation's income tax refund related to its recently filed income tax return.

In the accounting period when the items in inventory are sold, the cost of the items sold is removed from the asset inventory and is reported on the income statement as cost of goods sold.

In the U.S., a company can elect which costs will be removed first from inventory (oldest, most recent, average, or specific cost). During times of inflation or deflation this decision affects both the cost of the inventory reported on the balance sheet and the cost of goods sold reported on the income statement.

A manufacturer is required to report (on the face of the balance sheet or in the notes to the financial statements) the following ending inventory amounts:

You can learn more about inventory and the related cost flows by visiting our topic Inventory and Cost of Goods Sold.

Supplies includes the cost of office supplies, packaging supplies, maintenance supplies, etc. that the company has on hand.

The current asset prepaid expenses reports the amount of future expenses that the company had paid in advance and they have not yet expired (have not been used up).

To illustrate, assume that on December 1, a company pays its $1,800 insurance premium for property insurance covering the next six months of December 1 through May 31. This means that during each of the six months, 1/6 of the $1,800 = $300 will be reported on the monthly income statements. The amount not yet used up (still prepaid) as of each balance sheet date is reported as the current asset prepaid expenses.

You can learn more about prepaid expenses by visiting our topic Adjusting Entries.