When a company sells goods (and/or services) and allows its customers to pay at a later date, the company's accounts receivable or trade receivables will be increased at the time of the sale. From the time of the sale until the money is received, the company is an unsecured creditor of the customer. Therefore, every company needs to be cautious when shipping goods on credit since it could result in a loss of both working capital and liquidity if the company is not paid.

To assess a company's ability to convert its accounts receivable to cash during the prior year, it is common to compute the following:

To illustrate the calculation of the accounts receivable turnover ratio, let's assume that the company's net credit sales during the most recent year were $1,000,000 and the average of the balances in accounts receivable throughout the year amounted to $125,000. Based on these amounts, we have:

This calculation tells us that on average the accounts receivable turned over 8 times during the previous year.

When the accounts receivable turnover ratio is calculated using amounts reported on a company's published annual financial statements, there are some precautions:

Below is a chart illustrating why using only the final moment at the end of one or two accounting years can lead to a distorted accounts receivable turnover ratio and the related average collection period. In the following example, the company has a seasonal business with a busy season from May through October. 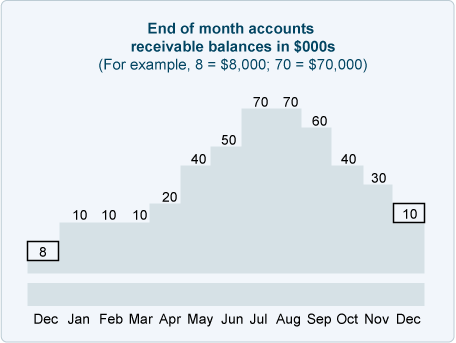 This shows why a company's current, detailed accounts receivable records will provide more precision than the summary amounts found in financial statements from an earlier year. Unfortunately, the people outside of a company will not have access to the current, detailed information.

When the accounts receivable turnover ratio is known, the average collection period is easy to compute:

Using the accounts receivable turnover rate of 8 times, the average collection period is:

The average collection period of 45 days will be one component of the operating cycle that we presented earlier:

Again, the 45 or 45.6 days is an approximation since the average was based on amounts during the prior year. Keep in mind that some customers may have paid early, some paid near the due date, some paid a week or two weeks late, some paid more than a month late.

Unfortunately for the companies offering the early payment discounts, some customers will take the discount but will not remit within the 10-day discount period.

Many companies will not offer early payment discounts because of the high cost. For instance, "2/10, net 30" means a 2% deduction is given for paying 20 days early (the customer must pay in 10 days instead of the required 30 days). Saving (or earning) $42 by paying $2,058 just 20 days sooner is an annualized return of 36% per year.

Requiring new and smaller customers to use a credit card

Some companies realize there is a cost for:

Even though the company selling the goods and services will have to pay a fee of perhaps 3-5% to the credit card processors, the seller gets the following benefits:

It is immensely important to have a good business relationship with your banker. This includes frequent communication regarding your business's financial situation and the actions being taken to have the necessary working capital and liquidity. In the process you will learn how your banker can assist with your company's financing.

If your banker is unable to provide financing, the banker may advise you where you can turn to for the needed financial assistance. For example, your banker may welcome working with an asset-based lender or a factor who purchases accounts receivable. Both the asset-based lender and the factor may advance cash equal to 85% of a company's receivables.

Since your banker's suggestions, advice, and understanding are valuable, establish the communication before your company experiences financial difficulty.