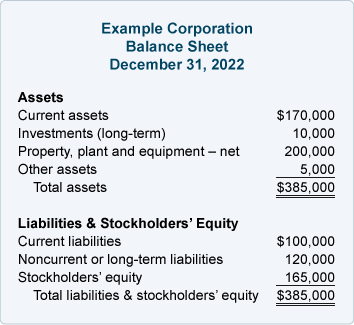 The classified balance sheet allows users to quickly determine the amount of the company's working capital. Using the amounts from the above balance sheet, we have:

A company's working capital must be managed so that cash will be available to pay the company's obligations when they come due. This is important for:

A second factor is the speed at which a company's current assets can be converted to cash. For instance, if a company has $170,000 of current assets but most of the amount is in slow-moving inventory, the company may not be able to convert the inventory to cash in time to pay the current liabilities when they come due. Not paying some obligations on time can have severe consequences.

Other factors include the credit terms that are allowed by the company's suppliers, the company's profitability and growth rate, the time required to complete a customer's order, and more.

An example of the current asset section of a balance sheet for a company selling goods on credit is shown here: 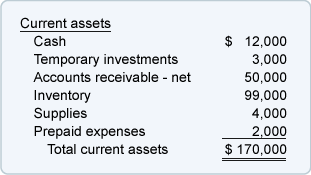 The current assets are listed in the order in which they are expected to be converted to cash. Accountants refer to this as the order of liquidity. Since cash is the most liquid asset, it is listed first. (Large companies often expand the description to be cash and cash equivalents.)

Cash includes a company's currency, coins, petty cash fund, general checking account, payroll checking account, money received from customers but not yet deposited, etc. The $12,000 shown above as "Cash" is the sum of those items.

Temporary investments include short-term certificates of deposits and securities that can be readily converted into cash.

Accounts receivable – net is the amount that a company currently expects to receive from customers who purchased goods or services on credit. It consists of the amount the customers owe minus an estimated amount that will not be collected. To illustrate, let's assume that the general ledger account entitled Accounts Receivable has a balance of $54,000. (This is the company's sales invoices which have not yet been paid by the customers.) If the company estimates that $4,000 will never be collected, the account Allowance for Doubtful Accounts will report a credit balance of $4,000. The net of these two account balances is $50,000 ($54,000 minus $4,000) which is listed after cash and temporary investments.

Inventory (goods held for sale) is listed after accounts receivable since it usually takes many months for a company to convert its inventory into cash.

Supplies is similar to inventory. Supplies could include packaging materials, shipping supplies, etc.

Prepaid expenses often include annual memberships, annual service contracts, and insurance premiums that were paid in advance. To avoid paying in advance, a company may be able to arrange for automatic monthly charges.

Having the current assets listed in their order of liquidity gives the readers of the balance sheet some idea of the company's ability to pay its obligations when they come due.

The following is an example of the current liabilities section of a company's balance sheet:

Since the current liabilities are not listed in the order in which they are due, a note payable that will be due in 11 months could appear first and the payroll taxes that are due in two days could be included in the fourth item.

Technology allows some companies to operate with less working capital than was needed in the past. Take for example a company that sells high demand products on its website with customers paying with credit cards at the time they place an order. The company will receive a bank deposit from the credit card processor within a few days of the sale. It is also possible that the company is allowed to pay its suppliers 30 days after receiving the products that will be sold in a few days.

These examples show how technology can speed up the conversion of a company's current assets to cash or how the company can delay the payment of cash for some purchases. Both will improve the company's liquidity without increasing the amount of working capital.

Under the accrual method (or accrual basis) of accounting the current asset accounts receivable is reported on the balance sheet when an amount has been earned. The amount earned is also reported as revenue on the income statement. When the company receives the money, accounts receivable will decrease and cash will increase.

Throughout this topic and in nearly all accounting textbooks, it is assumed that the accrual method of accounting is being followed. In short, the accrual method is the standard method to be used when financial statements are distributed to people outside of the company. (Income tax reporting may be different especially for small businesses.)

Changes in the Amount of Working Capital

A company's profitability is likely to be the most important influence on the amount of its working capital. A highly profitable company's operations may generate enough working capital that it can avoid the need for loans and/or additional money from investors.

Since working capital is defined as current assets minus current liabilities it will mean that: