We will pursue the interdependence of variances in the following examples.

Assume your company's standard cost for denim is $3 per yard, but you buy some denim at a bargain price of $2.50 per yard. For each yard of denim purchased, DenimWorks reports a favorable direct materials price variance of $0.50.

Let's also assume that the quality of the low-cost denim ends up being slightly lower than the quality to which your company is accustomed. This lesser quality denim causes the production to be a bit slower as workers spend additional time working around flaws in the material. In addition to this decline in productivity, you also find that some of the denim is of such poor quality that it has to be discarded. Further, some of the finished aprons don't pass the final inspection due to occasional defects not detected as the aprons were made.

Keep in mind that the standard cost is the cost allowed on the good output. Putting material, labor, and manufacturing overhead costs into products that will not end up as good output will likely result in unfavorable variances.

These two examples highlight what experienced managers know: you need to look at more than price. A low cost for an inferior input is no bargain if it results in costly inefficiencies.

What To Do With Variance Amounts

Throughout our explanation of standard costing we showed you how to calculate the variances. In the case of direct materials and direct labor, the variances were recorded in specific general ledger accounts. The manufacturing overhead variances were the differences between the accounts containing the actual costs and the accounts containing the applied costs. Now we'll discuss what we do with those variance amounts.

Let's begin by assuming that the account Direct Materials Price Variance has a debit balance of $3,500 at the end of the accounting year resulting from one purchase:

If all of the materials were used in making products, and all of the products have been sold, the $3,500 price variance is added to the company's standard cost of goods sold.

Now let's assume the direct materials are in various stages of use:

Accounting professionals have a materiality guideline which allows a company to make an exception to an accounting principle if the amount in question is insignificant. (For example, a large company may report amounts to the nearest $1,000 on its financial statements, or an inexpensive item like a wastebasket can be expensed immediately instead of being depreciated over its useful life.) This means that if the total variance of $3,500 shown above is a very, very small amount relative to the company's net income, the company can assign the entire $3,500 to the cost of goods sold instead of allocating some of the amount to the inventories.

If the balance in the Direct Materials Price Variance account is a credit balance of $3,500 (instead of a debit balance) the procedure and discussion would be the same, except that the standard costs would be reduced instead of increased.

Let's assume that the Direct Materials Usage Variance account has a debit balance of $2,000 at the end of the accounting year. A debit balance is an unfavorable balance resulting from more direct materials being used than the standard amount allowed for the good output.

The first question to ask is "Why do we have this unfavorable variance of $2,000?" If it was caused by errors and/or inefficiencies, it cannot be assigned to the inventory. Errors and inefficiencies are never considered to be assets; therefore, the entire amount must be expensed immediately.

If $2,000 is an insignificant amount relative to a company's net income, the entire $2,000 unfavorable variance can be added to the cost of goods sold. This is permissible because of the materiality guideline.

If the $2,000 balance is a credit balance, the variance is favorable. This means that the actual direct materials used were less than the standard quantity of materials called for by the good output. We should allocate this $2,000 to wherever those direct materials are physically located. However, if $2,000 is an insignificant amount, the materiality guideline allows for the entire $2,000 to be deducted from the cost of goods sold on the income statement.

The following table will serve as a guide for reporting variances that are significant in amount: 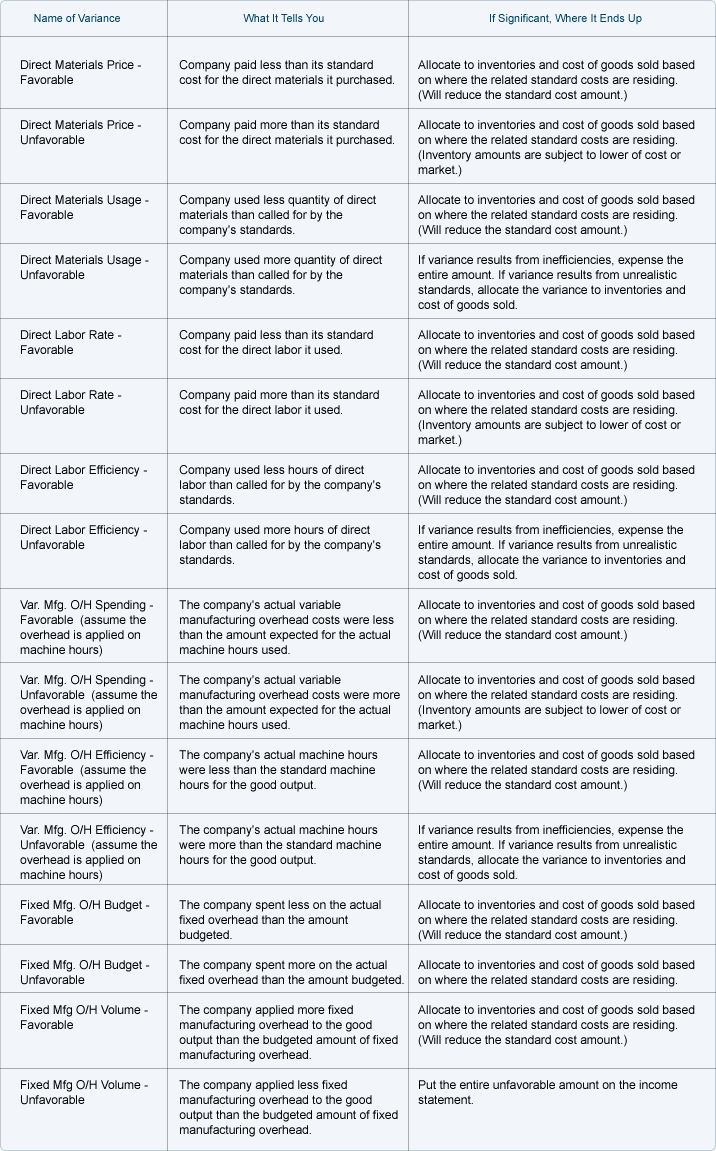