Standard costing is an important subtopic of cost accounting. Historically, standard costs have been associated with a manufacturing company's costs of direct materials, direct labor, and manufacturing overhead.

NOTE:
Standard costs can also be thought of as:

Standard costing (and the related variances) is a valuable management tool. If a variance arises, it tells management that the actual manufacturing costs are different from the standard costs. Management can then direct its attention to the cause of the differences from the planned amounts.

Usually there will be two variances computed for each input:

Since the calculation of variances can be difficult, we developed several business forms (for PRO members) to help you get started and to understand what the variances tell us. Learn more about AccountingCoach PRO.

Note: Our Guide to Managerial & Cost Accounting is designed to deepen your understanding of topics such as product costing, overhead cost allocations, estimating cost behavior, costs for decision making, and more. It is only available when you join AccountingCoach PRO.

Let's assume that your Uncle Pete runs a retail outlet that sells denim aprons in two sizes. Pete suggests that you get into the manufacturing side of the business, so on January 1, 2020, you start up an apron production company called DenimWorks. Using the best information at hand, the two of you compile the following information to establish the standard costs for 2020: 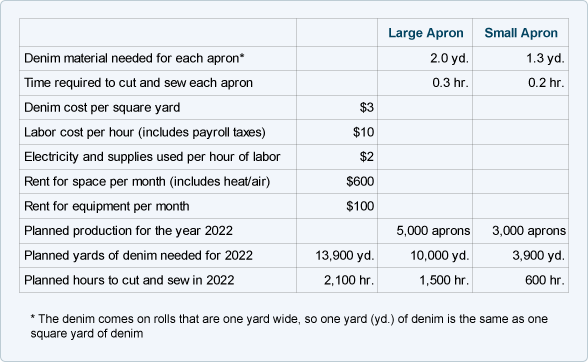 The aprons are easy to produce, and no apron is ever left unfinished at the end of any given day. This means that DenimWorks will never have work-in-process inventory at the end of an accounting period.

Examples of Standard Cost of Materials and Price Variance

The $100 credit to the Direct Materials Price Variance account indicates that the company is experiencing actual costs that are more favorable than the planned, standard costs.

In February, DenimWorks orders 3,000 yards of denim at $3.05 per yard. On March 1, DenimWorks receives the 3,000 yards of denim and the supplier's invoice for $9,150 due in 30 days. On March 1, the Direct Materials Inventory account is increased by the standard cost of $9,000 (3,000 yards at the standard cost of $3 per yard), Accounts Payable is credited for $9,150 (the actual cost of the denim), and the difference of $150 is debited to Direct Materials Price Variance as an unfavorable price variance:

After the March 1 transaction is posted, the Direct Materials Price Variance account shows a debit balance of $50 (the $100 credit on January 8 combined with the $150 debit on March 1). A debit balance in any variance account means it is unfavorable. It means that the actual costs are higher than the standard costs and the company's profit will be $50 less than planned unless some action is taken.

After this transaction is recorded, the Direct Materials Price Variance account shows a credit balance of $190. A credit balance in a variance account is always favorable. In other words, your company's profit will be $190 greater than planned due to the lower than expected cost of direct materials.

Note that the entire price variance pertaining to all of the direct materials received was recorded immediately (as opposed to waiting until the materials were used).

We will discuss later how to handle the balances in the variance accounts under the heading What To Do With Variance Amounts.