Long-term assets are also described as noncurrent assets since they are not expected to turn to cash within one year of the balance sheet date.

The long-term assets are usually presented in the following balance sheet categories:

Here is the long-term (or noncurrent) asset section from our sample balance sheets: 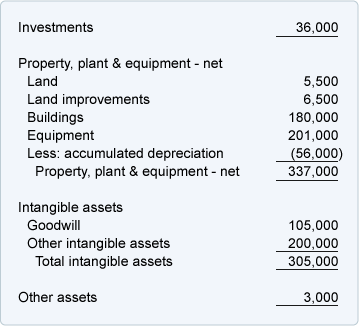 The first long-term asset Investments will include amounts such as the following:

While long-term investments in marketable securities are initially recorded at their cost, the amount of these investments will be adjusted (increased or decreased) to report their market value as of the date of the balance sheet.

The balance sheet category property, plant and equipment – net includes the cost of the noncurrent, tangible assets that are used in a business minus the related accumulated depreciation. (These assets are sometimes referred to as fixed assets, plant assets, long-lived assets, and capital assets.)

An asset's cost minus its accumulated depreciation is known as the asset's book value or carrying value.

NOTE: The depreciation and the accumulated depreciation reported on a company's financial statements are typically based on the assets' years of useful life.

These amounts are likely different from the amounts reported on the company's income tax return.

The following amounts often appear under property, plant and equipment – net or will be disclosed in the notes to the financial statements:

Land improvements include parking lots, lighting, driveways, etc. These will be depreciated over their useful lives.

Furniture and fixtures reports the cost of these items. Their cost will be depreciated on the financial statements over their useful lives.

The long-term asset construction in progress accumulates a company's costs of constructing new buildings, additions, equipment, etc. Each project's costs are accumulated separately and will be transferred to the appropriate property, plant, or equipment account when the asset is placed into service. At that point, the depreciation of the constructed asset will begin.

Accumulated depreciation reports the cumulative amount of depreciation that was recorded on the financial statements since the time that the depreciable assets were purchased and put into service. (The cost of land and the costs reported as construction in progress are not depreciated.)

The general ledger account Accumulated Depreciation will have a credit balance that grows larger when the current period's depreciation is recorded. As the credit balance increases, the book (or carrying) value of these assets decreases.

Intangible assets are described as assets without physical substance. The intangible assets that were purchased (as opposed to the result of effective advertising, training, etc.) are reported on two long-term asset lines:

Goodwill is assumed to have an indefinite useful life. Therefore, the recorded amount of goodwill is not amortized to expense. Instead, each year the recorded cost of the goodwill must be tested to see if the cost must be reduced by what is known as an impairment loss.

Except for trademarks, the amount paid to purchase any of these other intangible assets must be amortized to expense over the shorter of their expected useful life or their legal life.

The noncurrent balance sheet item other assets reports the company's deferred costs which will be charged to expense more than a year after the balance sheet date.