"Fixed" manufacturing overhead costs remain the same in total even though the volume of production may increase by a modest amount. For example, the property tax on the manufacturing facility might be $50,000 per year and it arrives as one tax bill in December. The amount of the property tax bill was not dependent on the number of units produced or the number of machine hours that the plant operated. Other examples include the depreciation or rent on production facilities; salaries of production managers and supervisors; and professional memberships and training for personnel in the manufacturing area. Although the fixed manufacturing overhead costs present themselves as large monthly or annual expenses, they are, in reality, a small part of each product's cost.

A simple way to assign or allocate the fixed costs is to base it on things such as direct labor hours, machine hours, or pounds of direct material. (Accountants realize that this is simplistic; they know that overhead costs are a result of—or are driven by—many different factors.) Nonetheless, we will assign the fixed manufacturing overhead costs to the aprons by using the same method we used for variable manufacturing overhead—by using direct labor hours.

Project/estimate the fixed manufacturing overhead costs for the year 2019.

We indicated above that DenimWorks' only fixed manufacturing overhead costs are rents of $700 per month (space and equipment) totaling to $8,400 for the year 2019.

Project/estimate the total number of standard direct labor hours that are needed to manufacture your products during 2019.

We can do that from the information given earlier (and repeated here):

Compute the standard fixed manufacturing rate to be used in 2019.

One of the reasons a company develops a predetermined annual rate is so that the rate is uniform throughout the year, even though the number of units manufactured may fluctuate month by month. For example, if the company used monthly rates, the rate would be high in the months when few units are manufactured (monthly fixed costs of $700 ÷ 100 units produced = $7 per unit) and low when many units are produced (monthly fixed costs of $700 ÷ 350 units = $2 per unit).

We begin by determining the fixed manufacturing overhead applied to (or absorbed by) the good output produced in the year 2019: 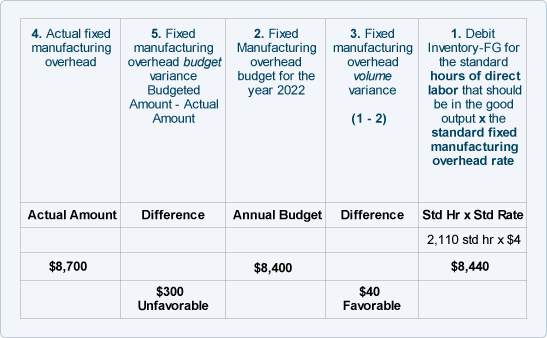 Actual fixed manufacturing overhead costs are debited to overhead cost accounts. The credits are made to accounts such as Accounts Payable or Cash. For example:

Another entry records how these overheads are assigned to the product:

We will discuss later how to report the balances in the variance accounts under the heading "What To Do With Variance Amounts".