Unlike direct materials (which are obtained prior to being used) direct labor is obtained and used at the same time. This means that for the given good output, we can compute the following at the same time (when goods are produced):

Let's begin by determining the standard cost of direct labor for the good output produced in January 2021:

Assuming that the actual direct labor in January adds up to 50 hours and the actual hourly rate of pay (including payroll taxes) is $9 per hour, our analysis will look like this: 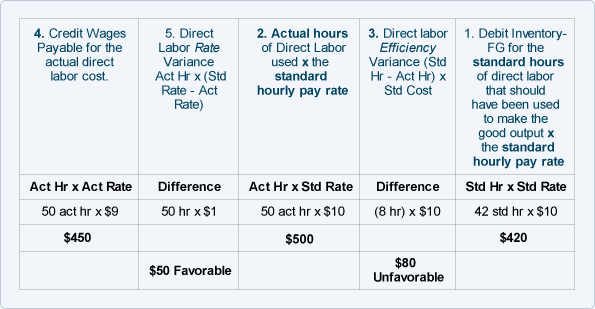 The journal entry for the direct labor used in the January production is:

In February DenimWorks manufactured 200 large aprons and 100 small aprons. The standard cost of direct labor and the variances for the February 2021 output is computed next.

If we assume that the actual labor hours in February add up to 75 and the hourly rate of pay (including payroll taxes) is $11 per hour, the total equals $825. The analysis for February 2021 looks like this: 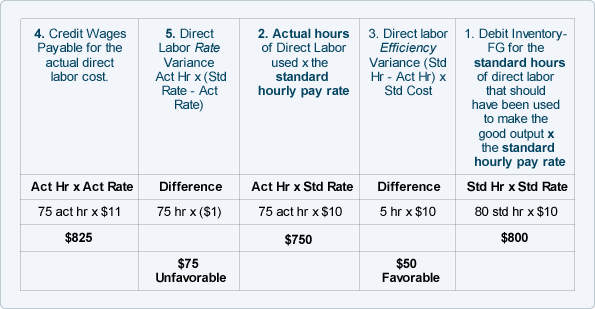 Notice that for February's good output, the total actual labor costs amounted to $825 and the total standard cost of direct labor amounted to $800. This unfavorable difference of $25 agrees to the sum of the two labor variances:

The journal entry for the direct labor used in the February production is:

Later in Part 6 we will discuss what to do with the balances in the direct labor variance accounts under the heading What To Do With Variance Amounts.