The financial statement that lists the components of stockholders' equity, their balances, and the changes that occurred during an accounting year is also known by the following titles:

The major components and headings in the statement of stockholders' equity include:

A common format of the statement of stockholders' equity is shown here:

To see a more comprehensive example, we suggest an Internet search for a publicly-traded corporation's Form 10-K.

The statement of cash flows (SCF) or cash flow statement reports a corporation's significant cash inflows and outflows that occurred during an accounting period. This financial statement is needed because many investors and financial analysts believe that "cash is king" and cash amounts are required for various analyses. The SCF is necessary because the income statement is prepared using the accrual method of accounting (as opposed to the cash method).

The statement of cash flows highlights the major reasons for the changes in a corporation's cash and cash equivalents from one balance sheet date to another. For example, the SCF for the year 2021 reports the major cash inflows and cash outflows that caused the corporation's cash and cash equivalents to change between December 31, 2020 and December 31, 2021.

The cash inflows are the cash amounts that were received and/or have a favorable effect on a corporation's cash balance. Hence, they will appear on the SCF as positive amounts.

The cash outflows are the cash amounts that were used and/or have an unfavorable effect on a corporation's cash balance. Hence, these amounts will appear in parentheses to indicate that they had a negative effect on the cash balance.

The major cash flows occurring during an accounting period are reported under the following headings or sections of the SCF:

In addition, the following supplementary or supplemental information must be disclosed: 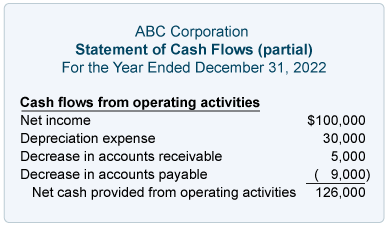 Under the indirect method, the first amount shown is the corporation's net income (or net earnings) from the income statement. Assuming the net income was $100,000 it is listed first and is followed by many adjustments to convert the net income (computed under the accrual method of accounting) to the approximate amount of cash.

Many of the other adjustments in the operating activities section of the SCF reflect the changes in the balances of the current assets and current liabilities. For example, if accounts receivable decreased by $5,000, the corporation must have collected more than the current period's credit sales that were included in the income statement. Since the decrease in the balance of accounts receivable is favorable for the corporation's cash balance, the $5,000 decrease in receivables will be a positive amount on the SCF.

If accounts payable decreased by $9,000 the corporation must have paid more than the amount of expenses that were included in the income statement. Paying more than the amount in the income statement is unfavorable for the corporation's cash balance. As a result the $9,000 decrease in accounts payable will appear in parentheses on the SCF.

You can gain additional insights regarding the cash flows from operating activities from our Explanation of the Cash Flow Statement.

The cash outflows spent to purchase noncurrent assets are reported as negative amounts since the payments have an unfavorable effect on the corporation's cash balance. A common outflow is connected to a corporation's capital expenditures. This is the property, plant and equipment that will be used in the business and was acquired during the accounting period.

The positive amounts in this section of the SCF indicate the cash inflows or proceeds from the sale of property, plant and equipment and/or other long-term assets.

Here is an example of what might be reported in the second section of the statement of cash flows:

Cash outflows used to repay debt, to retire shares of stock, and/or to pay dividends to stockholders are unfavorable for the corporation's cash balance. As a result the amounts paid out will be shown as negative amounts.

Here is an example of what might appear in the third section of the statement of cash flows:

In the above example we see that the payment of cash dividends of $10,000 had an unfavorable effect on the corporation's cash balance. This is also true of the $20,000 of cash that was used to repay short-term debt and to purchase treasury stock for $2,000. On the other hand, the borrowing of $60,000 had a favorable or positive effect on the corporation's cash balance. The net result of the four financing activities caused cash and cash equivalents to increase by $28,000.

Format of a Complete SCF

The following shows all three sections of the statement of cash flows: 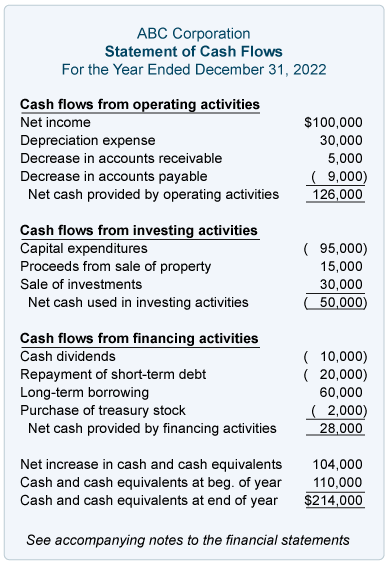 Note that near the bottom of the SCF there is a reconciliation of the cash and cash equivalents between the beginning and the end of the year.

In addition, the SCF must disclose the following supplementary information: amount of interest paid, amount of income taxes paid, and significant noncash transactions such as the exchange of shares of stock for bonds payable, or common stock for land. Typically, these are disclosed in the notes to the financial statements.

Some financial analysts also calculate what is known as free cash flow. This is defined as the amount of cash from operating activities minus the amount of cash required for capital expenditures. Some people also subtract the corporation's cash dividends when the dividends are viewed as a necessity.

Using the amounts from above, the ABC Corporation had free cash flow of $31,000 (which is the $126,000 of net cash provided from operating activities minus the capital expenditures of $95,000). If dividends are considered a required cash outflow, the free cash flow would be $21,000.