The following is a condensed version of an income statement for a regular corporation that sells products: 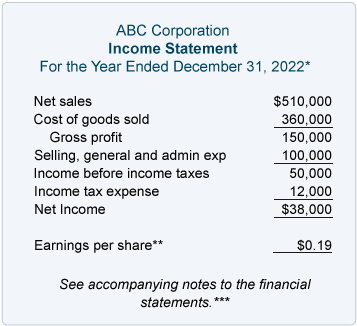 *The period of time could be a year, quarter, month, 13 weeks, eight months, etc.
**The earnings per share must be reported if a corporation's shares of stock are traded on a stock exchange.
***Every financial statement should inform the reader that the notes are an integral part of the financial statements and should be read for important information.

Amounts on the Income Statement

The historical cost principle means that most of the amounts shown on the income statement reflect a corporation's vast number of actual transactions that occurred with parties outside of the corporation. Most of the transactions were routinely recorded by the accounting system, but some additional amounts were included through adjusting entries.

Revenues are the amounts earned by a corporation through its main activities such as:

Under the accrual method of accounting, revenues are reported on the income statement in the accounting period in which they are earned (and there is a reasonable assurance that the amounts will be collected). The revenues (and the related assets) are likely captured at the time that the sales invoice is prepared. At the end of the accounting period, accountants will also prepare adjusting entries for revenues that were earned but were not yet fully processed through the accounting system.

(Keep in mind that under the accrual method of accounting the term revenues is different from cash receipts.)

Expenses are the historical costs that are associated with a corporation's main business activities, and are reported on the income statement. Examples of a retailer's expenses include:

If a corporation disposes of an asset that is no longer used in its business, the amount received should not be included in its sales revenues. Instead a gain or loss on the disposal is recorded.

The gross margin or gross profit percentage is monitored by the readers of the financial statements to determine if the corporation was able to maintain the usual percentage during periods when its product costs had increased. This is important because the corporation's gross profit amount must be sufficient to cover its selling, general and administrative (SG&A) expenses and to provide a sufficient amount of net income.

When a corporation's shares of stock are publicly traded, the income statement must display the earnings per share of common stock or EPS.

The historical cost principle means that most of the expenses reported on the income statement are the actual costs from past transactions. For instance, the expensing of building with an actual historical cost of $400,000 and a useful life of 40 years will mean that the annual depreciation expense will average $10,000 per year. It also means that the total of the depreciation expense over the asset's useful life cannot exceed $400,000. Thus the depreciation expense will be $0 after the cost of $400,000 has been expensed. This will be the case even if the building's market value increased to $2 million or more.

You will find more by reading our free Explanation of the Income Statement.