The remainder of our SCF explanation illustrates how specific transactions and account balances affect a company's cash flow satement (as well as its income statement and balance sheet).

We will use an easy-to-follow story with only one transaction per day to help you better understand the cash flow statement. You will also see how the financial statements are connected.

Matt is a college student who enjoys buying and selling merchandise using the Internet. On January 2, 2020, he decided to turn his hobby into a business called "Good Deal Co." Each month the Good Deal Co. had one or two transactions. Matt wants to prepare an income statement, balance sheet, and a statement of cash flows for the current month and for the year-to-date period. He asks our help in preparing and understanding the SCF.

On January 2, 2020 Matt invested $2,000 of his personal money into his sole proprietorship, Good Deal Co. On January 20, Good Deal buys 14 graphing calculators at a cost of $50 per calculator (which was about 50% of the selling price Matt has observed at the retail stores). The total cost to Good Deal for all 14 calculators was $700. Good Deal had no other transactions during January.

Matt prepared the income statement and balance sheet for his new business as of January 31, 2020 as shown below:

Note that the $50 cost of each calculator is not reported on the income statement as an expense until a sale occurs. (This is part of the accrual basis of accounting and the related matching principle.)

From the information on the company's income statement and balance sheet, we prepared the statement of cash flows for the month of January: 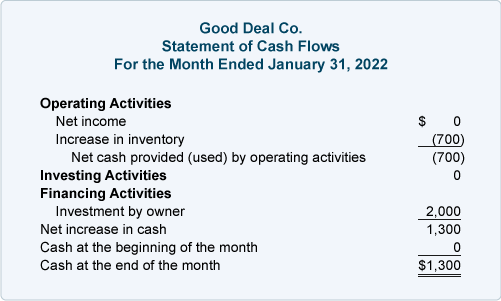 Amounts in parentheses indicate a negative effect on the company's cash balance. An amount in parentheses can also be viewed as a cash outflow or cash used.

The financing activities section shows Investment by owner 2,000 which had a positive effect of $2,000 on the company's cash. This amount could be discovered by examining the change in the owner's capital account between the two balance sheet dates. Again, you can view the positive $2,000 as cash that flowed in or was good for the company's cash balance.

For a change in liabilities and owner's equity, the change in Cash is in the same direction. Recall that when the owner invested cash in the company, Owner's Equity increased and Cash increased.

Matt prepared the following income statement for the month of February:

Under the accrual basis of accounting, revenues (such as sales of products) are reported on the income statement in the period in which a sale occurs. Typically, the sale occurs when the products or goods are shipped or delivered to the buyer (or services are provided). As the February 29 transaction shows, revenues can occur before cash is received. Since Good Deal Co. delivered 10 calculators at a selling price of $80 each to a reputable buyer, it had earned revenues of $800 on February 29.

Under the accrual basis of accounting, expenses should be matched with revenues when there is a cause and effect relationship. This means that a retailer should match its sales with the related cost of goods sold. In the case of Good Deal Co., it needs to match the cost of the 10 calculators sold with the revenues from selling 10 calculators. Therefore, its February income statement shows expenses of $500 (10 X $50) being subtracted from its revenues of $800.

Other expenses such as selling, general, administrative, and interest expenses must also be reported on the income statement when 1) they can be matched with the revenues, or 2) when a cost has expired, has been used up, or has no future value. If Good Deal Co. was renting a storage space for $50 per month, each month's income statement would also list rent expense of $50.

In summary, Good Deal Co. correctly reported $800 of revenues, $500 of expenses, and $300 of net income even though no cash flowed in or out during February. 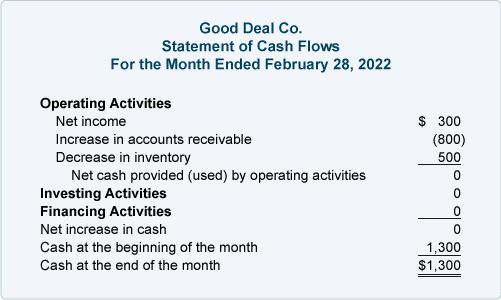 When a company's inventory decreases, it is good/positive for a company's cash. The reason is the company is not paying out cash for the items it is removing from inventory. While Good Deal Co.'s income statement for the month of February reported "Expenses 500" for the cost of its goods sold, the company did not pay out the $500 during February. Therefore, the company shows a positive $500 on its SCF as an adjustment to the net income amount. The $500 adjustment is not reporting what happened to the amount of inventory, it is reporting the necessary adjustment to convert the accrual accounting net income to the cash amount.

Now let's look at the year-to-date financial statements covering the two-month period of January 1 through February 29: 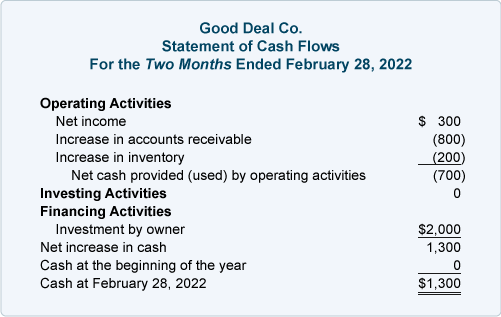 The cash flow statement also shows $2,000 of financing by the owner. When this is combined with the negative $700 from operating activities, the net change in cash for the first two months is a positive $1,300. This agrees to the change in cash on the balance sheet—none on January 1, but $1,300 on February 29.