Liabilities are a company's obligations (amounts owed). Their amounts appear on the company's balance sheet if they:

Liabilities (and stockholders' equity) are generally referred to as claims to a corporation's assets. However, the claims of the liabilities come ahead of the stockholders' claims.

Examples of the descriptions used to report a company's current liabilities include:

The order in which the current liabilities will appear on the balance sheet can vary. However, it is common to see three (listed in any order) at the top of the list: accounts payable, short-term loans payable, and the current portion of long-term debt.

Here is the current liability section from our sample balance sheets: 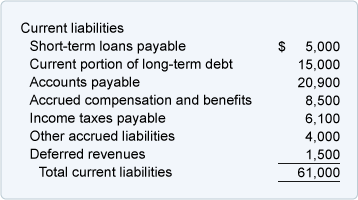 A short-term loan payable is an obligation usually in the form of a formal written promise to pay the principal amount within one year of the balance sheet date. Interest is likely to be due monthly. Short-term loans payable could appear as notes payable or short-term debt.

The current portion of long-term debt is the amount of principal that must be paid within 12 months of the balance sheet date. (The principal amount that comes due after 12 months is reported as a noncurrent liability.)

Since no interest is payable on December 31, 2021, this balance sheet will not report a liability for interest on this loan.

Accounts payable represents the amounts owed to vendors or suppliers for goods or services the company had received on credit. The amount is supported by the vendors' invoices which had been received, approved for payment, and recorded in the company's general ledger account Accounts Payable.

You can learn more by visiting our topic Accounts Payable.

The current liability accrued compensation and benefits reports the wages, salaries, bonuses, employers' payroll taxes, and benefits that employees have earned as of the balance sheet date, but they have not yet been paid by the company.

The current liability described as income taxes payable is the amount of income taxes that a regular U.S. corporation must pay to the federal and state governments within one year of the balance sheet date. (Sole proprietorships, partnerships, and some corporations will not have income taxes payable since the business income is reported by the owners on their personal tax returns.)

Other accrued expenses and liabilities

Other accrued expenses and liabilities is a current liability that reports the amounts that a company has incurred (and therefore owes) other than the amounts already recorded in Accounts Payable.

Examples of accrued expenses include interest owed on loans payable, cost of electricity used (but the electric bill was not yet received), repair expenses that occurred at the end of the accounting period (but the repair bill was not yet processed), etc.

In order to issue a company's financial statements on a timely basis, it may require using an estimated amount for the accrued expenses.

You can learn more about accrued expenses by visiting our topic Adjusting Entries.

Another item that could be included as part of other liabilities is the state and local sales and use taxes. To illustrate, assume a company sold $10,000 of merchandise that was subject to sales taxes of 8%. The retailer records this information in its general ledger accounts as follows:

Note that the sales taxes are not part of the company's sales revenues. Instead, any sales taxes not yet remitted to the government is a current liability.

The current liability deferred revenues reports the amount of money a company received from a customer for future services or future shipments of goods. Until the company delivers the services or goods, the company has an obligation to deliver them or to refund the customer's money. When they are delivered, the company will reduce this liability and increase its revenues.

Three examples of deferred (or unearned) revenues include:

You can learn more about deferred revenues by visiting our topic Adjusting Entries.