"LIFO" is an acronym for Last In, First Out. Under the LIFO cost flow assumption, the last (or recent) costs are the first ones to leave inventory and become the cost of goods sold on the income statement. The first (or oldest) costs will be reported as inventory on the balance sheet.

Remember that the costs can flow differently than the goods. In other words, if Corner Shelf Bookstore uses LIFO, the owner may sell the oldest (first) book to a customer, but can report the cost of goods sold of $90 (the last cost).

It's important to note that under LIFO periodic (not LIFO perpetual) we wait until the entire year is over before assigning the costs. Then we flow the year's last costs first, even if those goods arrived after the last sale of the year. For example, assume the last sale of the year at the Corner Shelf Bookstore occurred on December 27. Also assume that the store's last purchase of the year arrived on December 31. Under LIFO periodic, the cost of the book purchased on December 31 is sent to the cost of goods sold first, even though it's physically impossible for that book to be the one sold on December 27. (This reinforces our previous statement that the flow of costs does not have to correspond with the physical flow of units.)

Let's illustrate periodic LIFO by using the data for the Corner Shelf Bookstore: 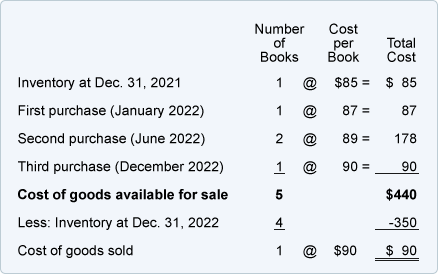 If the bookstore sold the textbook for $110, its gross profit under periodic LIFO will be $20 ($110 - $90). If the costs of textbooks continue to increase, LIFO will always result in the least amount of profit. (The reason is that the last costs will always be higher than the first costs. Higher costs result in less profits and usually lower income taxes.)

Under "periodic" the Inventory account is not updated and purchases of merchandise are recorded in an account called Purchases. Under this cost flow assumption an average cost is calculated using the total goods available for sale (cost from the beginning inventory plus the costs of all subsequent purchases made during the entire year). In other words, the periodic average cost is calculated after the year is over—after all the purchases of the year have occurred. This average cost is then applied to the units sold during the year as well as to the units in inventory at the end of the year. 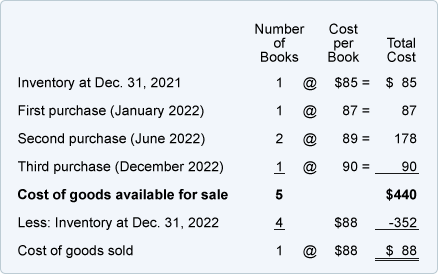