Components of the Income Statement

Below we will discuss each section of the income statement starting with the heading.

Heading of the income statement

In addition to the name of the company and the name of the financial statement, the heading of the income statement informs the reader of the period or time interval during which the reported amounts occurred. Typical periods of time are a year, year-to-date, three months, one month, 52 weeks, 13 weeks, 4 or 5 weeks, and others.

In the U.S., the annual time periods or time intervals could be:

Net sales is the first amount shown on the income statement of a retailer, manufacturer, or other companies which sell products. In other words, sales are generally the main operating revenues for companies selling goods.

Net sales is the combination of the following amounts which occurred during the period shown in the income statement's heading:

Sales are reported (recognized) on the income statement when the ownership of the goods passes from the company to the customer. In many companies this occurs before the customer pays for the goods. For example, if goods are sold to a customer in December 2021, but the customer is allowed to pay in January 2022, the amount of the sale is reported on the December 2021 income statement (and a receivable is recorded on the balance sheet at the time of the sale). When the customer's money is received in January 2022, the receivable is removed.

The cost of sales, cost of goods sold, or cost of products sold is the company's cost for the products that it sold during the period indicated in the income statement's heading. The cost of the sales is the dominating operating expense for companies that sell products. No other operating expense will come close to a company's cost of sales since it is often 60-80% of the net sales. Therefore, it is critical for the cost of the items sold to be calculated accurately.

A retailer's cost of sales includes the cost paid to the supplier plus any other costs to get the items into the warehouse and ready for sale. For example, if a retailer purchases a product for $300 and pays an additional $20 of shipping costs to get the item into its warehouse, the cost of the product is $320.

You can learn more by visiting our topic Inventory and Cost of Goods Sold.

Gross profit (sometimes shown as gross margin) is the result of subtracting the cost of sales from net sales, as shown in Example Corporation's partial income statement:

For any company to be profitable (have a positive net income), its gross profit must be greater than its selling, general and administrative expenses and nonoperating items such as interest expense.

The gross profit percentages (or gross margins) for Example Corporation have been improving as shown by the following calculations:

The selling, general and administrative expenses are commonly referred to as SG&A.

For a retailer, SG&A include the salaries, wages, rents, utilities, depreciation of assets, advertising, insurance, and other expenses associated with the retailer's primary activities, which are the purchasing and selling of merchandise.

Both the manufacturer's cost of sales and its SG&A expenses are operating expenses.

Interest expense is a nonoperating expense for most businesses since financing is outside of their main activities of purchasing/producing goods and selling goods and/or providing services.

[Interest expense for a bank would be an operating expense, since the bank's main activities involve paying interest to attract deposits that can be lent to borrowers to earn interest revenue.]

Since the interest expense incurred by retailers, distributors, and manufacturers is a nonoperating expense, it is presented after operating income as shown by hypothetical amounts in Example Corporation's partial income statement:

Loss on sale of equipment

When a company sells or scraps a long-term asset that had been used in the business, the asset's cost and accumulated depreciation must be removed from the company's accounts. In its place will be the cash received for the asset.

Since the company is not in the business of selling long-term assets, the amount received is not included in its operating revenues. Instead, only the gain or loss on the sale is shown on the income statement after the operating income.

To illustrate, assume a company had purchased equipment 8 years ago at a cost of $70,000 and its accumulated depreciation on the date of the sale was $55,000. The combination or net of these two amounts is $15,000, which is known as the equipment's book value or carrying value.

You can see from Example Corporation that the loss is listed after the operating income on the following partial income statement: 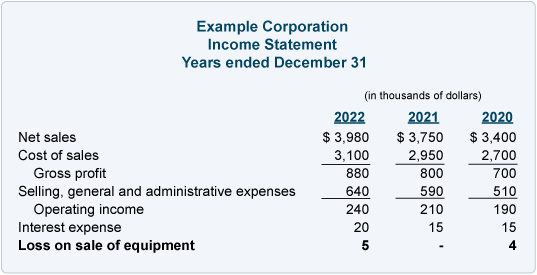 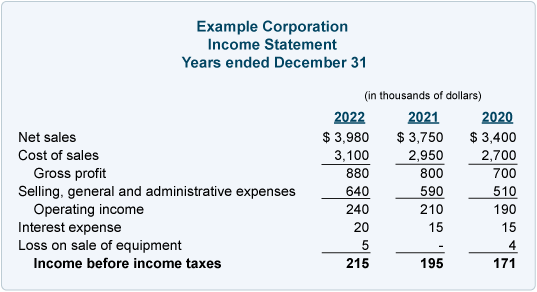 After subtracting the income tax expense, the resulting amount (referred to as the bottom line) is the corporation's net income or net earnings. The net income for Example Corporation can be see here: 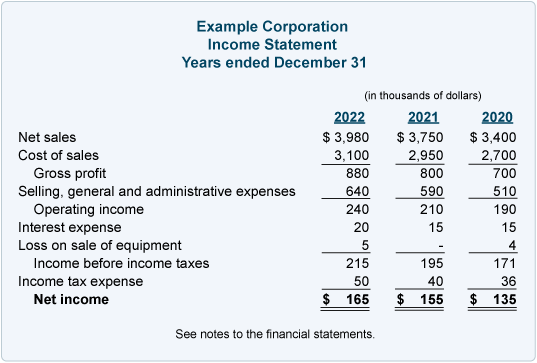