Example of an Income Statement

Example Corporation is engaged in the purchase and sale of goods (products, merchandise). It is also a regular U.S. corporation which means the income statement will include income tax expense. 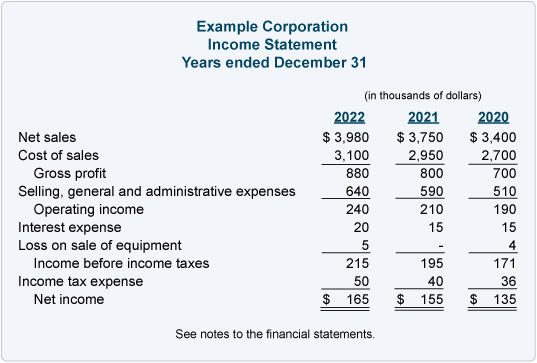 Income statement is one in a set of five financial statements

Reading only the income statement is not sufficient for understanding the financial activities of a business. Therefore, a business should distribute a set of five financial statements consisting of the following:

The heading of a comparative annual income statement will be changed to read "Years ended December 31" (since three years of income statements are shown. The years will be indicated at the top of each column of amounts.

Except for small companies, the amounts shown on the income statement are likely rounded to the nearest thousand or million dollars (along with a notation to inform the reader).

Rounding amounts is beneficial because it allows readers to focus on the most important digits. Omitting insignificant digits is also justified by the concept of materiality, because a lender or investor will not be misled without the least important digits.