On March 8 Good Deal receives $800 for the calculators sold to the school on February 28. No other transactions occurred in March. (Note that this $800 is a March receipt but is not revenue in March. The revenue was earned and was reported on February's income statement.)

The income statement for the one month ending on March 31 is shown here:

The income statement for the three months of January 1 through March 31 is:

The SCF for the period of January 1 through March 31 is shown here: 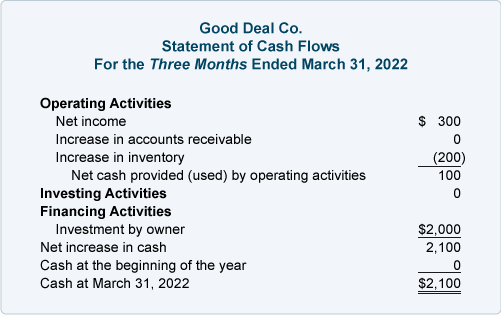 The statement of cash flows (SCF) for the first three months of the business (January 1 through March 31) begins with the company's accrual accounting net income of $300. This amount must be adjusted to show the net cash from operating activities (which are the company's activities pertaining to the purchasing/producing of goods and selling of goods and/or providing services).

Since the amount of the company's accounts receivable was $0 at January 1, and $0 at March 31, there is no adjustment and this line could have been omitted.

The combination of the positive net income of $300 and the adjustment for the cash used to increase inventory (200) results in the net cash provided by operating activities of a positive $100.

The owner's $2,000 investment in January was a source of cash (hence it was a cash inflow, was good for the company's cash balance, etc.) and is listed as a positive 2,000 in the section described as financing activities.

Finally, the combination of the amounts from the three sections of the SCF is $2,100. This agrees with the change in the amount of cash on the company's balance sheets: $0 on January 1, and $2,100 on March 31.

Look at the "Change" column above. The first amount, a positive $800 change in the Cash account, will serve as a "check figure" for the line Net increase in cash on the cash flow statement for the month of March. In other words, the cash flow statement for March must end up explaining the $800 increase in the Cash reported on the balance sheet. The other balance sheet amounts that changed will be used on the statement of cash flows to identify the reasons for the $800 increase in cash.

Since there were no revenues and no expenses in March, the income statement for the one month of March (shown earlier) reported no net income. This $0 of net income will be shown as the first amount reported on the statement of cash flows. The changes in the balance sheet accounts from February 28 to March 31 provided the other information needed for the following SCF for the month of March: 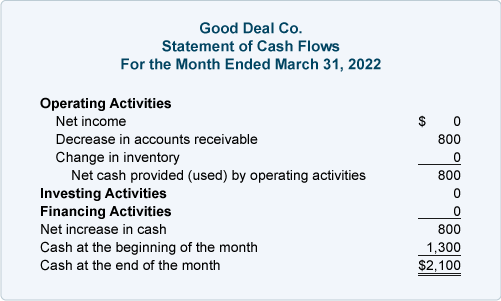 Let's review the cash flow statement for the month of March 2021: