When a Company Purchases Identical Items at Increasing Costs

We will use a hypothetical business Corner Bookstore to demonstrate how to flow the costs out of inventory and into the cost of goods sold on the company's income statement. Often this is done by using either the periodic inventory method or the perpetual method.

Before we begin, keep in mind that there can be a difference between the following:

Generally, the units are physically removed from inventory by selling the oldest units first. Therefore, the physical units of product are flowing first in, first out. Companies want to get the oldest items out of inventory and keep the most recent (freshest) ones in inventory. Businesses will refer to this as rotating the goods on hand or rotating the stock.

However, the costs of the goods in inventory does not have to flow the way the goods flowed. This means the bookstore can remove the oldest copy of its three copies from inventory but remove the cost of its most recently purchased copy. In other words, the goods can flow using first in, first out while the costs flow using last in, first out. This is why accountants refer to the cost flows as cost flow assumptions.

Let's assume the Corner Bookstore had one book in inventory at the start of the year 2021 and at different times during 2021 it purchased four additional copies of the same book. During the year 2021, the publisher increased the price of the books due to a paper shortage. The following chart shows Corner Bookstore's total cost of the five books was $440. It also assumes that none of the books has been sold as of December 31, 2021. 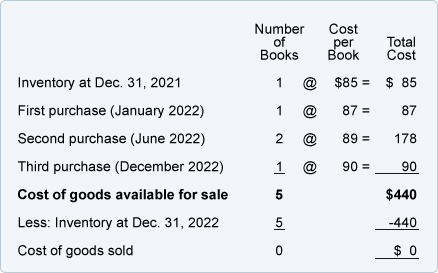 In the U.S., three of the most common ways to flow costs out of inventory and into the cost of goods sold are:

Note that these are cost flow assumptions. Recall that the order in which costs are removed from inventory (and reported on the income statement as the cost of goods sold) can be different from the order in which the goods are physically removed from inventory. In other words, if Corner Bookstore sells one book that was on hand at the beginning of the year it can remove from inventory the $90 cost of the most recently purchased book in December 2021 (if it had elected the periodic LIFO cost flow assumption).

The combination of the three cost flow assumptions and the two inventory systems means six options for calculating the cost of inventory and the cost of goods sold: