Let's relate the profit improvement concepts discussed in Story #1 to some additional situations. In each story below, a company must make one or more decisions to achieve its goal of improving profits (or reducing its losses).

The City Center Mall—which had been in decline for a number of years—was recently purchased by a dynamic developer and some new upscale stores are opening there. Jane Jones owns the Bridal Boutique, a wedding and formal dress store located in the suburbs. She is being recruited by the new mall owner to open up a second store in the revitalized City Center Mall. Jane is being offered a lease that requires no security deposit and no fixed rent expense—instead, the rent would be a variable expense of 9% of sales and be due 15 days after the end of a month (e.g., on May 15, Jane would pay the landlord 9% of April's sales.)

Jane estimates that monthly fixed expenses will amount to $5,000 per month (salaries, some wages, telephone, and some advertising). Her existing store in the suburbs is leased at a fixed monthly rent expense of $3,000. The sales at that store average $300,000 per year and would not be affected by the new store in the City Center Mall.

Jane studies the profile of the mall neighborhood and sees that new condominiums are selling quickly. Based on the sales records of previous and current mall tenants and the records of her existing store, Jane conservatively estimates her sales at this new location will be $400,000 per year. Jane's banker advises against opening the additional store based on his past experiences with other clients facing similar choices. Jane's intuition, however, tells her that the additional location with the variable rent is just too good to pass up.

Below is the analysis Jane uses to make her decision. 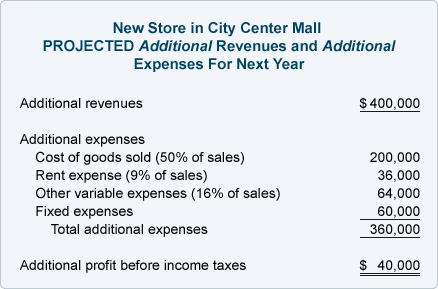 Since the existing store's sales and expenses will not be affected by the new location, they are not relevant and were omitted in the analysis. The Bridal Boutique's high quality merchandise, favorable prices, and tightly controlled expenses are not part of the analysis either because they exist with or without the new location.

It is, of course, imperative that Jane use realistic numbers in her analysis—sales must be clearly attainable and controls must be in place to keep expenses within their planned range. If the above amounts are realized, opening this second Bridal Boutique store will give Jane an additional profit before income taxes of $40,000.

Although her analysis shows that she will be improving profits, Jane also needs to be concerned with cash flow. The circumstances at the new store are such that rent is paid 15 days after the month is over, employees are paid one week after the two-week work period ends, and merchandise is paid for 30 days from purchase. Customers at Jane's new location will purchase goods using cash and credit cards. Jane is also able to turn her inventory every 30 days. As a result of these conditions, Jane is confident that her cash flow will be positive.

Jane decides to open this second Bridal Boutique store and finds it to be successful. The situation worked out very well thanks to specifics such as the high level of mall traffic and the rent amount charged as a percentage of sales.

Bob Smith owns several locations of the Daily Grind, a cafe and sandwich shop. Bob concludes that he should close one of his locations at the end of its lease because of disappointing sales. The store is no longer in a prime location and the poor sales do not warrant the fixed rent expense of $3,000 per month.

Because Bob has some loyal customers, he inquires about renting space in a new development within a mile of the old location. That new development, however, has already signed tenants who would compete with Bob for the same customers. In addition, there are more competitors who just opened stores within several miles of the new development. The space available for his cafe in the new development requires a long-term lease and a monthly rent expense of $3,800.

Bob estimates that annual sales at the new cafe would be approximately $300,000. Cost of goods sold would be 50% of sales and other variable expenses would be 16% of sales. In addition to the rent of $3,800 per month, there would be fixed expenses (primarily salaries and wages) of $5,000 per month.

To help make the decision on whether or not to open the new cafe, Bob prepares the following analysis of additional revenues and additional expenses: 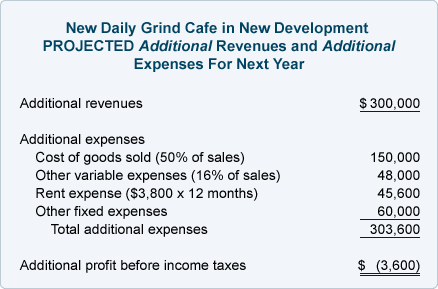 Instead of improving profits, the projections reveal an annual loss of $3,600—not a very good exchange for Bob's additional risks and commitments in opening a cafe in the new development. When Bob's accountant advised him against opening the cafe, she detected that Bob really wants additional annual sales. She suggests that Bob shift his focus from sales (the top line of the income statement) to net income (the bottom line of the income statement).

By focusing on the bottom line, Bob may find that he can get additional net income without the long hours, staffing challenges, uncertain sales, and high fixed expenses of a new location.