We will illustrate the details of depreciation, and specifically the straight-line depreciation method, with the following example.

A company has decided that it wants to use the straight-line method for reporting depreciation on its financial statements. The company purchased equipment for use in its business operation and provides the following information:

Given the above information, the straight-line depreciation expense for each full year that the asset is used will be $2,000 as calculated here:

If a company's accounting year ends on December 31, the company's income statement will report the depreciation expense as follows:

The company's cash payment for the equipment took place on a single day in 2020 as shown here:

Assuming the company prepares only annual financial statements for its years that end on December 31, the adjusting entries will be as follows: 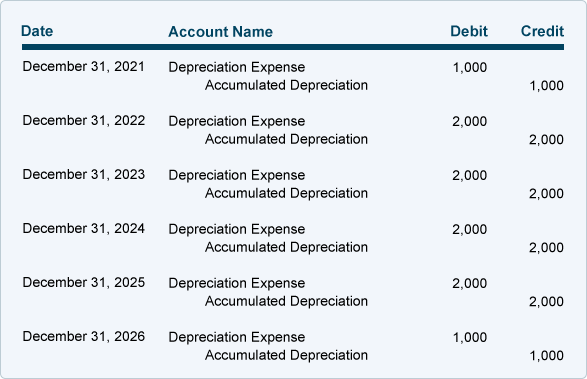 If a company issues monthly financial statements, the amount of each monthly adjusting entry will be $166.67.

Visualizing the Balances in Equipment and Accumulated Depreciation

To assist in visualizing the balances in the asset account Equipment and the related contra asset account Accumulated Depreciation as of December 31, 2021 we are providing the following T-accounts:

Using the account balances in the T-accounts above, the book value or carrying value of the company's equipment as of December 31, 2021 is:

When the asset's book value is equal to the asset's estimated salvage value, the depreciation entries will stop. If the asset continues in use, there will be $0 depreciation expense in each of the subsequent years. The asset's cost and its accumulated depreciation balance will remain in the general ledger accounts until the asset is disposed of.

Depreciation is Based on Estimates

What Happens When an Estimated Amount Changes

A significant change in the estimated salvage value or estimated useful life will be reported in the current and remaining accounting years of the asset's useful life.

To illustrate a change in the estimated useful life of an asset, we will assume a company had the following situation:

Note in the following T-accounts that on December 31, 2019, the balance in the Equipment account is $14,000 (the cost of the equipment) and the account Accumulated Depreciation has a credit balance of $8,000: 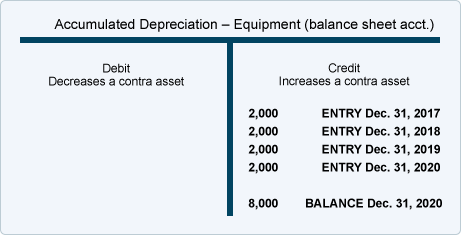 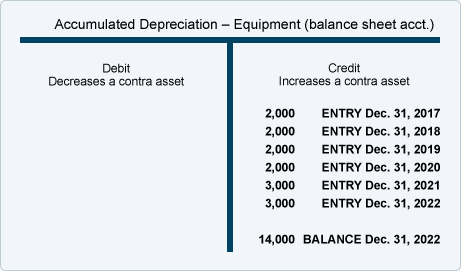 Note that the depreciation amounts recorded in the years 2019 and before were not changed.

Now that you have learned the basic concepts of the depreciation reported on a company's financial statement, we will move on to calculate depreciation using three additional depreciation methods: