Businesses often face the need to spend large amounts of money on assets that will be functional for many years. Here are a few examples:

Expenditures made for long-term assets are referred to as capital expenditures and are recorded as assets on the balance sheet. During the years that these assets (other than land) are used, their costs are systematically moved from the balance sheet to the income statement through Depreciation Expense.

Note: Our Guide to Managerial & Cost Accounting is designed to deepen your understanding of topics such as product costing, overhead cost allocations, estimating cost behavior, costs for decision making, and more. It is only available when you join AccountingCoach PRO.

Limitations such as time, money, and logistics frequently prevent a company from moving forward with too many major expenditure projects at the same time. Instead, a company will often rank its projects by priority and profitability. By using a process called capital budgeting, the company decides which capital expenditure projects will be undertaken and when.

At the top of the list of capital expenditure projects are those for which no real choice exists (e.g., installing an updated sewer line within the plant to replace one that is leaking, correcting a safety hazard, correcting a code violation, etc). The remaining capital expenditures are usually ranked according to their profitability using a capital budgeting model.

There are a number of capital budgeting models available that assess and rank capital expenditure proposals. Let's take a look at four of the most common models for evaluating business investments:

While each of these models has its benefits and drawbacks, sophisticated financial managers prefer the net present value and the internal rate of return methods. There are two reasons why these models are favored: (a) all of the cash flows over the entire length of the project are considered, and (b) the future cash flows are discounted to reflect the time value of money.

The following table highlights the differences among the four models:

Let's use the capital budgeting models to evaluate a potential business investment at Treeline Manufacturing, Inc.: 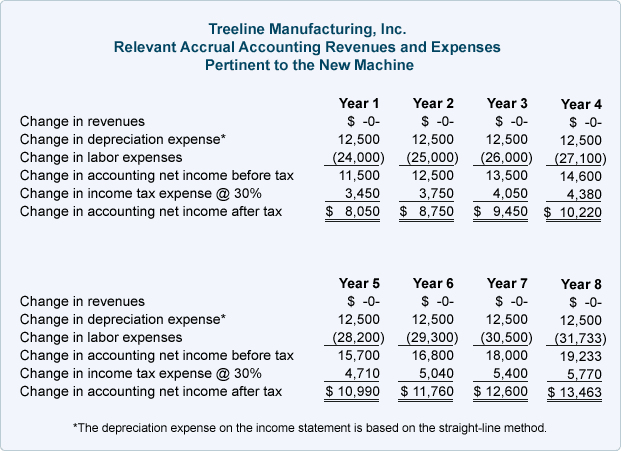 If the new machine is purchased, Treeline's income statements will show a reduction of labor expense of about $24,000 in Year 1 and $31,733 in Year 8—an average of $27,729 during the 8 years. The income statements will also show additional depreciation expense of about $12,500 per year (the $100,000 cost of the machine and a useful life of 8 years with no salvage value). The net result of the average annual labor savings of $27,729 minus the additional annual depreciation expense of $12,500 is an average of $15,229 of additional net income before income tax expense. Assuming a combined federal and state income tax rate of 30%, the net income after income tax expense will average approximately $10,660 per year.

Treeline's balance sheet will start with the new asset's carrying amount (or the book value) of $100,000. The book value will decrease to $0 at the end of 8 years. In other words, the balance sheet amount will average about $50,000 per year during the 8-year period.